I was appointed Lecturer in Screen Studies in Drama at the University of Manchester in 2008. I specialise in screen practice as research and my interests also revolve around the boundaries between artistic and academic forms of representation. My approach is based on the practice and critical study of qualitative research methods, such as extended fieldwork and participant observation, using collaborative and improvisational art forms to mediate complex cultural understanding to the popular audience. This approach has developed as a research interest through film and theatre education, freelance work as an actor and director in Sweden, Guatemala and Brazil, during my work as a documentary filmmaker in the UK and as a guest lecturer at various universities. In 1997 I graduated in Social Anthropology at the University of Stockholm and I completed my MA in Visual Anthropology at the University of Manchester in 2001. I was awarded a PhD in Drama in 2009 for my practice-based research on the ethnofictions of Jean Rouch, focusing on the use of projective improvisation in ethnographic filmmaking and applied on identity, performance and discrimination among transgendered Brazilians. 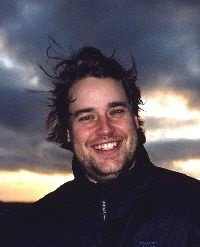 Pictured above: Johannes Sjöberg
Posted by s.low project berlin at 19:11