X
Jaana Kokko is an artist living in Helsinki. She works with video, photography, installation, drawing and text. In her work she is interested not only in the exploration of the expressive and historical aspects of art, but she finds it equally important to understand and be aware of the fact that a finished piece of art and the act of displaying it publicly are political comments.
Considering the political act as a guideline for creation is in her opinion not a restrictive but a freeing viewpoint.
She graduated from the University of Art and Design in Helsinki (2002) after studying new media, scriptwriting and photography. In 1999 she graduated from the Helsinki School of Economics. 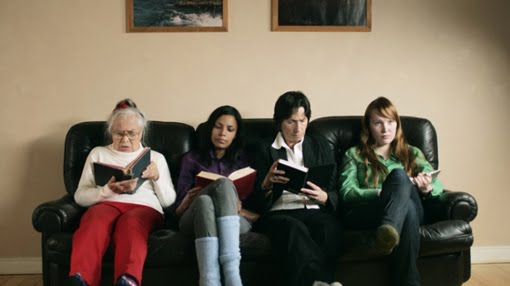 Jaana Kokko (2010):
The Reading Circle (Introduction to What is Political)

The Reading Circle is an experimental film about the pleasure of collective rereading.

Four women meet in a private apartment in Helsinki to discuss the meaning they attach to the term "political". Through this intellectual discussion based on Hannah Arendt’s thinking, and the monologues each of the women, they define the image of a political individual and a political woman: What does ‘political’ mean? How to define ‘womanly political’? Is it possible to attain a revolutionism that transcends generations and redefine ‘political’?

In the work speech is divided into different forms: reading out loud, simultaneous reading, Brechtian dialogue and monologue. These forms of speech include public and individual, even intimate language. A language that defines the work to a large extent both visually and auditively is the sign language.Although the work is characterized by a pluralistic discussion, the emphasis of the work lies on its visual and auditive aspects instead of narration.